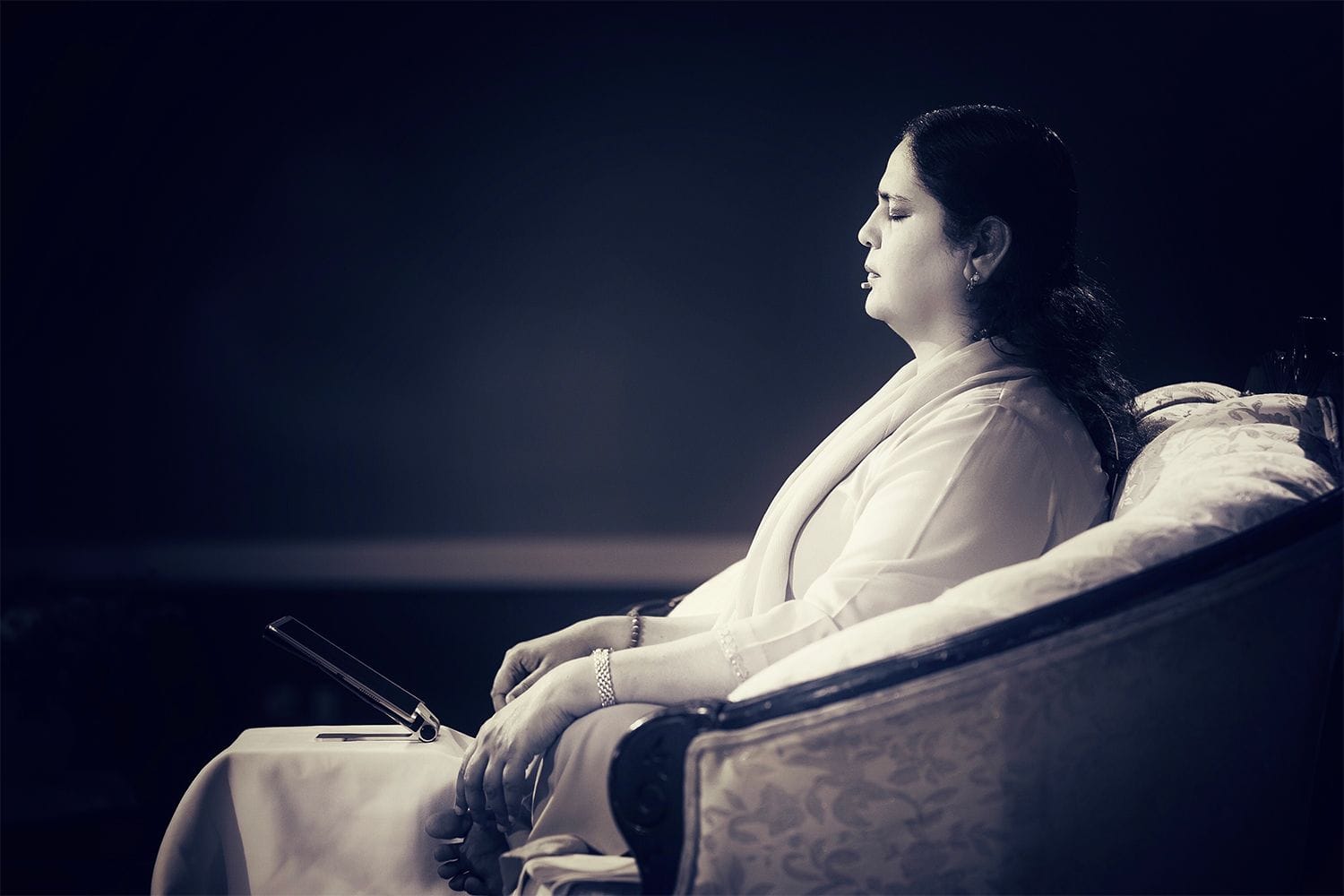 Manuscipts of ancient India chronicling the perennial cascade of age-old wisdom, rewinded with the revered Master's reforming expositions, emphasizing its significance for the contemporary man. Wake up from the deep slumber of ignorance, with the rising Sun of our ancient wisdom. Discard the deceptive beliefs and metamorphose into an awakened being. Witness your life transform with these sutras, the fundamental truisms of existence.

This venerated scripture, an integral part of the great epic Mahabharata is an eternal panacea for all ills afflicting human beings, irrespective of whether one is a worldly person or an aspirant. It is as oceanic as it is diverse for in it one finds the confluence of all paths to Truth. Given its encyclopaedic magnitude, the insightful, comprehensive, enlightening exposition of this great scripture by revered master Anandmurti Gurumaa evokes a sense of reverence, aspiration and surrender in a true seeker. An epitome of wisdom and compassion, the revered master has delineated this intriguing dialogue between Lord Krishna and Arjuna in such an inspiring way that the Shrimad Bhagawad Gita can become one’s best friend and companion, guiding us through whatever travails life throws at us. Let its priceless wisdom encompass every aspect of your life. Hailed as the celestial song, let this eternal cascade of wisdom enliven, inspire and enlighten your path. The master’s exposition will cut through your veil of ignorance, it will arm you with the double-edged sword of dispassion and discrimination.

The venerated scriptures of ancient India are its eternal and inexhaustible treasure. Encapsulated in them are sutras that contain the gist of life.These scriptures would remain mere manuals if a Self- realised master does not explicate the concealed wisdom of the highest order. Yet who is a true master, how does one find a true master? Who is a true disciple? How does one surrender to the true master methodically with sincerity and devotion? What does a master-disciple bond entail? All such queries of a true seeker can be understood with the scripture Shri Guru Gita, a treatise of the dialogue between Lord Shiva and his consort Goddess Parvati. This scripture is the heart of Skandha Purana. Yet what worth is a book whose essence remains beyond the reach of a seeker. To help true seekers walk steadily on their path of spiritual evolution the revered master with her cascading wisdom has blessed the disciples with her expositions on this scripture. In-depth explanation of the verses in utmost lucid style by the master is a treasure trove of knowledge for every spiritual aspirant.

The most sublime of all; the fountain-head of Indian philosophy is the classic knowledge of Vedanta. Shri Adi Shankaracharya not only unravelled the truisms of Advaita philosophy but also established these axioms as the fundamental truth of metaphysics or epistemology. These series of esoteric scriptures compiled by him are unparalleled and beyond comparison to any other text. There remains no question of ignorance when with the sword of discerning wisdom, one cuts through the false sense of I-ness in the body, mind or senses. Encapsulating this liberating essence is the Advaita classic Nirvanashatakam. Delve into the realisation of true-self and drop all fictitious facades with the Master’s heart piercing revelations about Self, expounding the eternal truth of Advaita.

Eternal truth of Self swathed in timeless poetic verses; Adi Shankaracharya’s penetrative words stir the heart of a seeker. It is a call to wake up from the slumber of ignorance. Wake up and rise to know thyself. Chant the name of the beloved; Bhaj Govindam. One exhausts the precious gift of life in sheer ignorance and chasing material indulgences for a pursuit of happiness. Even when one starts to explore the path to the Lord’s reign, one gets stuck with ritualistic practices or merely following the scriptures with simply cramming up the verses without any comprehension of its essence. The experience which remains beyond the realms of the mundane plane needs guidance of a Self-realised master. An epitome of wisdom and compassion, the revered master illuminates the dark path of a seeker with these profound verses unveiling the otherwise unfathomable secrets for a disciple.

The knowledge of ancient India is not just compiled in Sanskrit but an array of other languages. The sages of India left no stone unturned to ensure the highest knowledge of our scriptures reaches each and every man. With immense compassion they compiled texts in regional languages. Their farsightedness and thoughtfulness didn’t keep the common man bereft of true knowledge. One such text in khadi-boli, in a unique question-answer format is Shri Vichaar Chandrodaya written by revered sage Pandit Pitambar ji. It is an all-encompassing scripture which not only delves into subjects like what is the pursuit of life, but also includes a systematic methodology of Self-inquiry. Laced with logic and precise dialectics, comprehending such an obscure text needs the intervention of a Self-realised master. Breaking the barriers of language the revered master Anandmurti Gurumaa has bestowed us with her grace by allowing the knowledge in the scripture to pour into our puny minds. The master has explained the treatise with such finesse that it nomore remains perplexing to a seeker, rather fills him with awe and in admiration of this masterpiece.

A man may spend his entire life in pursuing education and gathering knowledge of varied subjects igniting temporal interest. Yet one will remain unsatiated for nothing will fill the undying vacuum within which sustains the endless quest for the unknown. Only when this unknown is realised, one is known to have had Atmabodha. Comprehending the ineffable is however an arduous task, for it does not entail an exploration outside but a dive within, even beyond the dark waters of the mind. Had it not been the esoteric texts of Adi Shankaracharya, the unifying philosophy of Vedanta would have remained unplumbed. On the other hand, one may have the scripture at hand, yet the 68 verses of this text are even beyond the intellect, for it is itself limited to reflection on the mundane. The revered master Anandmurti Gurumaa has graced all with an exposition on this scripture explaining each verse with her unequalled adeptness and wisdom. Let your true- Self be known to you, allow the inexplicable to be explained, to revisit a truth ever-known yet unrealised.

Vedanta Sara is a 15th century vedantic text expounded by Adi Shankaracharya. It is the highest form of wisdom as it derives the unity between the Self and Brahman - the ultimate human objective. It is a philosophy of Advaita, literally meaning non-dualism, which aids in discarding off that which is unreal. Revered Master Anandmurti Gurumaa has laid down a very simple yet structured approach which will reach out to every layman helping him to understand and relate to this philosophy of the Upanishads. It is highly rewarding in sufficing a sincere seeker with the synopsis of the zenithal wisdom. This text embodies the essence of Vedanta. It is the concluding segment of the Vedas. It is not about anybody else, but the knowledge of your own true self. So let the essence of Vedanta be imbibed in you and live your life in the shelter of knowledge born out of it.

Upanishads are highly revered sources of eternal knowledge as deciphered by our ancient sages. Yet what are the scriptures without a self-realised master; a kite without a string?Incomprehensible! Literally too, Upanishad means the knowledge which one receives sitting next to the master, from the master itself. The master alone can decode the hidden meaning between the lines. To all seekers of liberation, this scripture is a drop of immortality with each word, and verse removing the illusory shackles man considers himself to be bound with. Fly into the new horizon of the sky that never ends leaving behind the cage of ignorance. The master has yet again brought a new blessing for all seekers longing for the realisation of the undying, non-transient, immortal Self. Let yourself drown in this elixir of elixirs to be born anew.

A life devoid of love is akin to a barren land which will never be fragrant with the aroma of blossoming tuberoses or jasmine. This signifies the necessity of sincere devotion and surrender in a bhakta for his Ishta. No matter what path a seeker may follow the destination indeed is Self-realisation, yet without a heart soaked in love one will never realise what it is to have eyes moist, welled up with bitter-sweet tears that are yearning for a glimpse of the beloved perpetually. Expounding the same glory of the bhakti yoga and the overwhelming love of a bhakta is this scripture compiled by the well-known sage Narada. This ancient text has received new life with the revered Master’s exposition for the contemporary man, elucidating in detail how he may set out on a journey for the unison with the beloved, for whom his heart remains pining, bringing an absolute dissolution to all hankerings.

The timeless wisdom of Shri Guru Arjan Dev encapsulated in the beautiful bani, leads every seeker closer to his own Self. On the path of spirituality one may remain elusive of what is truth and what is illusory, had it not been for the master’s guidance. The anchor of every seeker are the master’s verses  which illuminate the otherwise dark path of a seeker engulfed with ignorance. The revered master has rekindled the fire with every verse of the Gurbani. Filled with profound love and wisdom, these verses expand the truth beyond words. The master’s elucidation with effortless ease makes it further more digestible to one and all.

This classic scripture of Gurbani compiled by the revered saint Guru Nanak Dev ji, is an ocean of knowledge in which a seeker will find liberation only once he drowns. The deeper one sinks in the vastness of this knowledge, the higher he rises from the illusionary realms that bind him. Famous for encapsulating the intertwined love and wisdom in the utmost beautiful manner, the Bani of Nanak is an outpour and yearning for the lord, the Absolute Being. Igniting our hearts with the fire of similar longing while also parallely filling it with a downpour of love, such are the expositions of the compassionate Master Anandmurti Gurumaa. Unravel the secrets encoded in the masterpiece of the great mystic.

The king of kings, the emperor of our hearts, the beloved sage Guru Gobind Singh ji compiled this sacred text with couplets venerating the glory and grandeur of the Absolute existence. Bringing forth an amalgam of wisdom surpassing the barriers of language, this text beautifully embodies the expression of love in the heart of every seeker. Woven with love and infused with the ever-flowing grace of revered master Anandmurti Gurumaa, this compilation is an opportunity to immerse into this spring of timeless wisdom, which will intimately pervade your life,  leaving no room for ignorance.